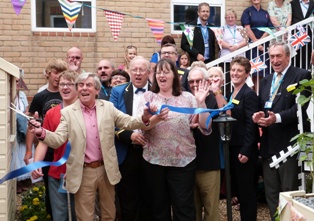 Melvyn Hayes, the well known actor, and Island resident, visited the Children's Ward, St Mary's Hospital, Isle of Wight to open a garden which had been created in the memory of James Sparks.  James was a long term patient of Children's Ward who died aged 17 in 2009.

Shortly after James's death his family donated money to the Ward to use on a garden project.  Some work was carried out on an area of waste ground at the rear of Children's Ward; garden furniture and a shed was bought but the garden remained untidy and run down.

This Spring the staff on Children's Ward decided to give the garden a complete ‘make over’.  Ideas were gathered and plans were drawn up to make the garden a place which had a special meaning in the form of a memorial to James.  Above all, staff were determined that the garden should be a safe area of calm and relaxation to be used by patients, parents, staff and visitors.

One of James great interests was railways and trains.  His enthusiasm inspired the theme for the garden.  As you enter the garden you start a train ride through the countryside to the sea.  The garden shed has been painted and has become the ticket office with a platform outside.  Street artist Tony Trowbridge has spray painted a train on one of the walls, together with a unique Isle of Wight poster. Garden plants in seaside colours take you to the beach and into the sea.  There is even a seagull which ‘flies’ over the ticket office.  The garden furniture and umbrellas complete the colourful picture. The waste ground is now a delightful area for everyone to enjoy outside the confines of the Ward.

Pauline Martin, Ward Clerk on Children’s Ward said, “The time and commitment given by staff has been magnificent.  Their determination to see the project through, together with the donation from James' parents has enabled us to create a vibrant living memorial to James."

Importantly, while in hospital, James would enjoy watching ‘It Ain't Half Hot Mum’ with his father.  Therefore, it was particularly fitting that Melvyn Hayes who played the unforgettable Gunner Gloria Beaumont in the hit comedy opened the James Sparks Memorial Garden.

Before cutting the tape Melvyn gave an excellent speech about the project and Melvyn Hayes called “A wonderful memorial to James.”    Melvyn’s whose career has also involved productions for Family and Children is well known for his performances as a traditional Pantomime Dame in Christmas Pantomimes such as Nanny Nellie in Sleeping Beauty and Widow Twankey in Aladdin.  He also performed voices on children's cartoons such as Super Ted, The Dreamstone, Little Dracula, Alfred J. Kwak, and Budgie the Little Helicopter.

Shanklin Brass band provided some of the entertainment at the opening. James was a former member of the Junior Band musicians from James era are now with the Senior Band who attended.  The Band finished their session by playing the march from the film The Great Escape which James often would humorously whistle on the Ward.

The Children’s Ward at St. Mary’s Hospital is a 13 bedded ward with attached 6 bed day ward providing support to some of the Island’s most poorly children and their parents which can additionally include visitors to the Island.  The full range of conditions cared for includes Surgical, Medical, Orthopaedic and Mental Health.   Also attached to the ward are the Children’s Community Nurses who care Island wide for Children aged from 2 weeks to 18 years of age.

Find out what is happening in our services.

Enhanced visiting restrictions are in place. These will be reviewed regularly based on the current situation at St Mary's Hospital alongside the latest guidance from UK Government and NHS England.

Everyone that visits a Trust building is required to wear a face covering and maintain social distancing at all times.

Please visit our Patients and Visitors page for the latest guidance. This page was last updated on Monday 23 August 2021.