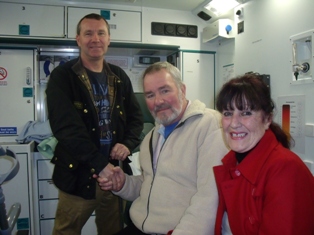 A Community First Responder has been reunited with one of the patients whose life he saved.

Jeff Butt, of Cowes, who has been in the voluntary role for over 12 years, was alerted to the 999 call whilst at work in August this year. Jeff, a composite worker at GKN’s East Cowes site, was able to respond to the emergency in just three minutes. When he arrived at the scene, he found East Cowes resident Gary Hadley collapsed in cardiac arrest, lying face up on the driveway of his home.

Jeff quickly put into action his training given by the Isle of Wight Ambulance Service and successfully resuscitated the patient. The Ambulance Crew arrived minutes later to further assist Gary, who has been making a very good recovery ever since the incident.

Speaking about the ordeal, Gary Hadley, said: “If it wasn’t for Jeff I wouldn’t be here today. I have no memory of what happened but I know that Jeff shocked me and restarted my heart before the Ambulance crew arrived and took me to hospital.

“To think he volunteers his time and doesn’t get paid for it. First Responders do a marvellous job, I’m so glad Jeff’s a First Responder. He deserves a medal, he really does.”

Paramedic Dominique Howard, and lead for the Community Response scheme, said: “This is a very good example of why the Community Response scheme is so valuable to communities right across the Island. Research has shown that in cases of cardiac arrest, fast access to emergency support can increase pre-hospital survival rates by 25-30%. We would like to see more volunteers involved in the scheme, to extend the areas we currently cover. Sometimes the care as simple as providing reassurance prior to the ambulance’s arrival: sometimes it can be saving someone’s life”.

Speaking about being a Community First Responder and attending to Gary, Jeff said:

“Anyone who is thinking about joining the scheme should just go for it. I decided to become a Community First Responder because I had a young family and I wanted to know what to do if something happened to them or anyone else, I didn’t want to be that person that walks past an incident in the street because they simply didn’t know what to do to help.

“I’m pleased to have been able to help Gary but it’s not just down to me, I’m one of the people in the chain that was able to help. Sometimes the most rewarding thing about being a responder can be the simple things; the look of relief on someone’s face when you walk through their front door to help, it’s a great feeling.”

Community First Responders are volunteers who are trained and dispatched by the Ambulance Service to attend emergency calls in the area where they work or live. The aim is to reach potentially life threatening incidents in the first vital minutes before the ambulance crew arrives on scene.  They usually use their own cars, without blue lights or sirens, and because they are local, can be on the scene of life threatening medical emergencies in just a few minutes ahead of their ambulance crew colleagues.

Currently, there are schemes that cover the areas of East Cowes, Cowes, Bembridge, Whitwell, Godshill, Brighstone and St Helens. More volunteers are needed to reach the rest of the Island and if you would like to get involved, you should contact Dominique Howard on (01983) 534912 or email firstResponders@iow.nhs.uk  . You need to be over the age of 18 and have access to a car to be eligible to join the scheme.

From Thursday 1 September 2022, all patients, staff, and visitors are no longer required to wear a face mask at St Mary's Hospital and our other Trust sites.

These changes have been made in line with national guidance on the mandated use of face masks in healthcare settings and the reducing numbers of positive cases.

Our visitor policy continues to allow patients two visitors a day for up to an hour between 10am and 8pm, and these no longer need to be pre-booked.

Our restrictions, including mask wearing, will be reviewed regularly based on the current situation at St Mary's Hospital alongside the latest guidance from UK Government and NHS England.

Please visit our Patients and Visitors page for more information. This page was last updated on Thursday 15 September 2022.