This page is a printable version of: https://www.iow.nhs.uk/news/First-case-of-awake-surgery-at-the-Isle-of-Wight-NHS-Trust.htm
Date: 05 December 2022 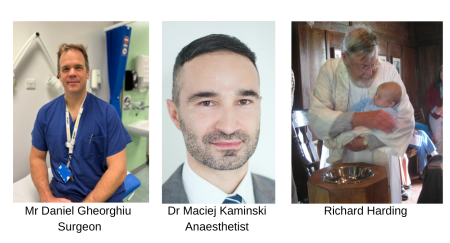 Richard Harding (79), from Yarmouth was the first person who had a successful awake complex shoulder operation at the Isle of Wight NHS Trust which took place at the end of 2021.

During a routine CT scan it was discovered that Richard, who was being treated for cancer, had fractured his upper arm and without surgery his mobility and quality of life would have been significantly impacted.

Due to Richard’s underlying health conditions, surgery under a general anaesthetic was not an option as it would have posed a serious risk to Richards’s health. Transfer to a mainland hospital for surgery was also not feasible.

“We knew that Richard’s quality of life depended on this surgery going ahead and without it he would have been reliant on a wheelchair and fully dependant on carers for the rest of his life.

Despite the complexity of Richard’s circumstances, anaesthetist Dr Maciej Kaminski and surgeon Mr Daniel Gheorghiu worked together with Richard and collectively agreed to go ahead with the only option that would mean Richard would be anaesthetised using a combined nerve block and be awake during his surgery.

Dr Maciej Kaminski, who has worked for the Trust for 18 months, specialises in regional anaesthesia techniques which block the pain transmission in nerves. Also known as ‘nerve blocks’, these techniques allow patients to be painfree during the operation without the need for a general anaesthetic. Patients may be fully awake or receive sedation - medication that will help them feel more relaxed and/or more sleepy during a procedure. Especially in limb surgery it can be the sole anaesthetic or be used as an adjunct pain relief.

“There are multiple benefits to using this approach as there are a fewer side effects and it provides better pain relief. Patients will experience a quicker recovery time as they will have much less nausea, constipation, confusion and drowsiness post-surgery.

“Wide awake surgery is a well-established strategy in modern anaesthesia. What made this surgery so unique was the fact that it would normally be performed with a general anaesthetic alternative - contraindicated in this case.  To overcome this, 3 different nerve blocks were combined and administered by the anaesthetic team (Dr Maciej Kaminski, Dr Andrea Leinenkugel, ODP Peter Wilkinson). This approach had 90% chance of providing adequate anaesthesia. We collectively accepted a small risk of abandoning the surgery if blocks failed as we balanced it against unsuccessful outcome if we had cancelled the surgery outright.”

“From a surgical point of view the advantage is the ability to offer very sick patients the surgery they need to improve their quality of life, if a general anesthetic is contraindicated.

“The set up for surgery has to be  modified to cater for a wide-awake patient. It takes careful multiprofessional planning and there needs to be trust between the patient, surgical, anaesthetic and theatre teams."

“After and during the surgery, which took around 3 hours, Richard was fully awake (he had been receiving mild relaxing medications) and within 15 minutes ready to go back to the ward. Patients recover much more quickly using this method and are usually up and about from surgery and able to eat and drink normally.”

Richard who was a full time priest in Devon before retiring on the Island 10 years ago sadly passed away on Christmas Day after suffering with cancer.

Speaking to his family his wife and daughter praised the outcome of the surgery that Richard had as it enabled him to retain some independence and quality of life.

“He felt nothing during the procedure, he was amazed at how quickly his arm healed and how he was able to regain the use of his arm.

“He didn’t feel worried about being awake and there wasn’t really a question in his mind whether the surgery should go ahead or not.

"Without the surgery our father would have been in considerable pain and discomfort. By having the operation it gave him back an improved quality of life which was really important in his last few months."

Going forward our teams are looking to explore using this method with more patients due to the benefits it brings.

We are currently exploring ways which could allow us to offer wide awake upper limb surgery routinely to all patients in the future.”

All our services remain under extreme pressure, we will only be using our Emergency Department (ED) for life threatening injuries or illnesses. You may be redirected to alternative services if you arrive at our ED requiring minor care.

Please make sure you visit NHS 111 online first or call NHS 111 for heath advice, or alternatively contact your local pharmacist or GP. Find more information on where to go if you are feeling unwell.

You can also help us by collecting family and friends from hospital as soon as they are ready to be discharged.

Our blood testing service has now moved to North Hospital. Head to our blood service website page for more information.

This page was last updated on Tuesday 1 November 2022.