This page is a printable version of: https://www.iow.nhs.uk/news/Phoebes-light-is-here-and-family-continue-fundraising-efforts-for-Esmes-light.htm
Date: 12 August 2022 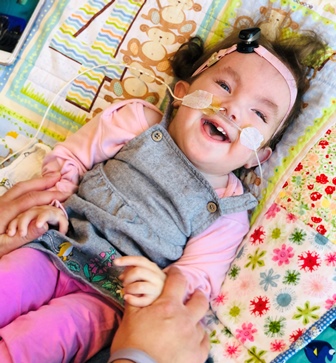 The IOW NHS Trust’s children’s ward are really pleased to have now received Phoebe’s light on the ward and that it is in action helping children have less stressful blood tests or cannulas.

It makes blood tests less traumatic for all the children but especially those who are really poorly.

“We are so happy that the vein finder is now here and we are able to make such a difference to all children who have to have their bloods taken or medication given.

“Phoebe and her mum visited the ward this week to see what their amazing fund raising efforts had paid for and were delighted.

“We want to say a very big thank you to Phoebe’s family that led the way in fundraising for this amazing piece of equipment and thank everyone else who also helped in raising or contributing funds.

From Friday 8 July 2022, all patients, staff, and visitors are asked to wear a face mask at St Mary's Hospital and all other Trust sites.

This is in place to help protect our patients, staff and community.

We would like to thank everyone for their support, and to be assured that the COVID-19 measures are regularly reviewed.

Our visitor policy allows patients two visitors a day, for up to an hour.

Please visit our Patients and Visitors page for more information. This page was last updated on Friday 8 July 2022.