This page is a printable version of: https://www.iow.nhs.uk/news/Worlds-First-Chemo-Drone-Delivery-Announced-on-NHS-Birthday.htm
Date: 29 January 2023 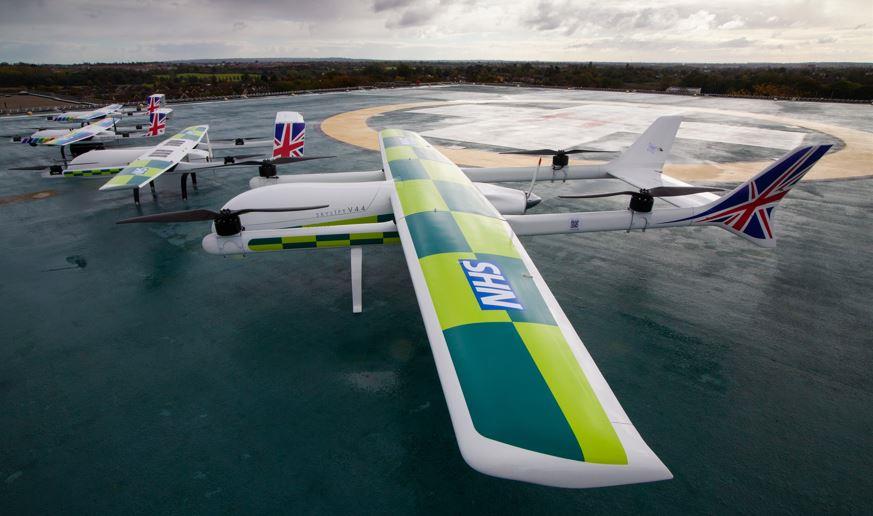 NHS cancer patients will be the first in the world to benefit from chemotherapy delivered by drone as part of a new trial, NHS chief executive Amanda Pritchard announced today.

The drones, set to make their first flight in the coming weeks, will mean that the lifesaving treatment can be picked up and dropped to patients on the same day.

Announcing the major trial on the NHS's 74th birthday, NHS chief executive Amanda Pritchard said the drone deliveries were just the latest “extraordinary” instalment in another year that has showcased NHS innovation and cutting-edge technology.

In a first of its kind trial, starting on the Isle of Wight, chemo will be flown directly from the pharmacy at Portsmouth Hospitals University NHS Trust to St Mary’s Hospital, where staff will collect it before distributing it to hospital teams and patients.

Chemotherapy is difficult to transport as some doses have a short shelf life so the NHS has partnered with tech company Apian to come up with a new way of getting the treatment to patients in record time.

Drones will cut the usual delivery time from four hours to 30 minutes, saving fuel and money and making cancer care much more convenient for patients living on the Isle of Wight who often need to travel to the mainland for treatment at the moment.

Each drone delivery replaces at least two car journeys and one hovercraft or ferry journey per delivery – saving carbon emissions and contributing to improving air quality for patients and the community.

It will also help the NHS become the first health system in the world to become carbon neutral.

The drone programme will be trialled initially in the Isle of Wight followed by Northumbria and could allow clinicians to make “same-day orders” for vital medical equipment and other treatments.

NHS chief executive Amanda Pritchard said: “Delivering chemo by drone is another extraordinary development for cancer patients and shows how the NHS will stop at nothing to ensure people get the treatment they need as promptly as possible - while also cutting costs and carbon emissions.

“From a smartwatch to manage Parkinson’s to revolutionary prostate treatments and making the most expensive drug in the world available to NHS patients, it has been another amazing year of innovation in the way the health service delivers treatment and care.

“As the NHS turns 74 it is clear that the pace of change and improvement across the health service is only accelerating as our fantastic staff seek to make the most of life-changing advances to improve patients lives as we promised in the NHS Long Term Plan.”

The NHS Long Term Plan committed to deploying the latest cutting-edge technologies while rolling out new innovations and treatments to patients across the country.

Earlier this year, the NHS announced that patients with Parkinson’s disease would be given life-changing smartwatches that allow doctors to remotely assess their condition in a pioneering project to revolutionise NHS care.

The health service also began treating sickle cell patients with a life-changing drug after striking a deal for the ground-breaking treatment, crizanlizumab, which will be offered to up to 5,000 patients within three years.

For the first time ever, the NHS has also been able to offer the game-changing cystic fibrosis treatment, Kaftrio, to hundreds of children between 5 and 12, thanks to a landmark deal struck by NHS England to ensure all patients can access it in line with MHRA guidance.

Seven-year-old Kate Farrar was one of the first under 12s to start getting the drug this year, which is revolutionary in that it treats the underlying cause of cystic fibrosis, giving Kate hope of her dream to fulfil her dream of becoming an Olympic gymnast.

Pat Maunders, 64, from Rushden, in Northamptonshire also took part in a Cytosponge pilot being rolled out by NHS England which uses a small capsule-shaped device being swallowed and then extracted via string to collect samples for analysis.

Mrs Maunders, said: “Overall it was a very quick procedure and there was no pain or discomfort and nothing to be afraid of.

“It is less intrusive and quicker than having a gastroscopy tube camera investigation under sedation and I was happy to have it instead and support the NHS research.

“Swallowing was easy and then you wait. The only slight irritation is when they carefully pull the sponge up – but that only lasts about three seconds."

For patients with advanced and aggressive forms of cancer, the NHS has struck a number of deals this year, from the 30-minute treatment for advanced womb cancer called Dostarlimab, to a life-extending injection for blood cancer, called daratumumab that can extend the lives of patients with a recurring and incurable cancer of the bone marrow cells – known as multiple myeloma – by an average of nine months.

Talking about how the chemo drone will be able to support services in the Isle of Wight, the IOW NHS Trust CEO Darren Cattell said: “The Island has a long history of innovation. We are excited to continue that tradition by utilising the latest technology to overcome the challenges we face and to provide the very best service to our patients.

“We are still at a relatively early stage but the use of drones to transport medical supplies is a concept that has radical and positive implications for both the NHS and for patients across the UK as well as the Isle of Wight. It is great to be part of this innovative project.”

Apian CEO, Alexander Trewby said: "My mother worked for the NHS in Portsmouth her entire life before she passed away from cancer three years ago.

“This project marks a very important first step in the construction of a network of drone corridors connecting hospitals, pathology labs, GP surgeries, care homes and pharmacies up and down the country so that in the future, everyone's mother will benefit from the delivery of faster, smarter and greener healthcare.”

“Apian was supported by the NHS Clinical Entrepreneur Programme (CEP) which provides support to entrepreneurial NHS staff helping nurture innovation within the NHS and then they received funding support from our Small Business Research Initiative Healthcare Awards. The first-ever drone delivery of chemotherapy will show the very best of the impact that innovation can have on patient care as well as contributing to supporting the NHS’s net-zero goals.”

We are asking everyone to help us by:

This page was last updated on Tuesday 17 January 2023.