This page is a printable version of: https://www.iow.nhs.uk/news/transawarenessweek2021.htm
Date: 09 December 2021 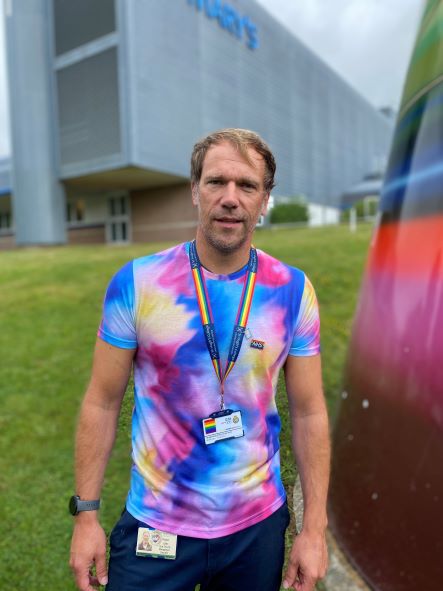 Supporting a transgender child
18 November 2021
This Trans Awareness Week a member of our Trust, Rob Jubb, our Head of Health and Safety, has shared his story about his daughter Layla to help support and encourage families who may be supporting their loved ones who come out as transgender.
"It was a cold February in 2017 when our daughter told us about being transgender. She told her mum face to face but I know she struggled to talk to me about it so she wrote me a letter. I remember reading the letter about 3 times and then going to her room, giving her a hug and telling her I loved her and left her to carry on with what she was doing, she was writing music at the time. I felt the simple gesture at that time was just right to let her know “it’s ok”.
"Prior to this day and the months leading we had some behaviours that as a parent were worrying including isolation, depression and self harm. We knew something was not right for her and as we now know she was clearly struggling with being in the wrong body. She had spoken to her mum a few times about her thoughts so it was not a shock on the day of the letter but I know I had a problem coming to terms with what was going on for Layla. I did put it down to being a phase and it would all blow over. That letter was the kick i needed to finally realise this was her now and I need to be there for her.
"At first, adjusting to her new pronouns was tough. I kept messing up and using male pronouns. After a while, my brain switched over to the new pronouns and the new name she had chosen. Our family were initially skeptical. They thought this was a phase that would blow over with time. But they saw how happy she was as a girl and they adapted. Now, none of us can imagine her NOT being a girl.
"Although her teachers were very supportive, we opted to keep her transgender identity quiet at school. At first, we didn't tell any of the other parents and when she decided to tell her closest friends, nearly all of them were extremely supportive. It's not easy to keep this information private now that she's getting older, but most people have respected her privacy. In fact, none of her friends particularly care that she's trans –they care more about having fun with their friend. Both the school and her friends were amazing.
"From a supportive perspective we were quite alone. Everywhere we looked for help we were turned down. Currently the NHS has no pathway for those who identify as transgender and our GP did not provide support either. Before her 16th birthday CAMHS supported Layla and helped with the referral to the Tavistock Clinic in London. Layla had 2 appointments at the Tavistock however when she reached 18 years old she was now classed as an adult and needed to be referred to their adult services. However 3 years later Layla is still waiting for an appointment due to the significant waiting list, we are now 3 years later with no appointment. The tragic fact is that these children are suffering due to the provisions they need not being easily available.
"Shortly before her 17th birthday, my daughter began taking 'blocker' medications and oestrogen hormones, so that she can develop from a girl into a woman. This "buys some time," allowing us to pause puberty and prevent changes to the body that are extremely distressing and are often irreversible.
"Raising a trans kid is pretty similar to raising any other child. You listen, you respect who they say they are and you love them unconditionally. I'll fight for my daughter's rights no matter what, as any loving parent would. My advice....just listen. Take your child seriously. If this is a phase, it will pass, and if it's not a phase, you will be there for them during those hard times. In the end, whatever your child's sexuality or gender identity, you will be able to look back and say, 'I didn't always know what to do, but I stood with my child. I had their back and they always felt heard and loved.'
"Layla is remarkable, not only achieving one of the highest GCSE maths and A Level percentages on the Island she also got to Oxford University to study maths and is now in her third year. All these achievements whist struggling with her identity and mental health.
"All I want for my daughter and for every child, whether they are transgender or not, is that they have the chance to be truly themselves, with the loving support of their families, friends and communities."
If you would like more information or support head to the NHS website.

Enhanced visiting restrictions are in place. These will be reviewed regularly based on the current situation at St Mary's Hospital alongside the latest guidance from UK Government and NHS England.

Everyone that visits a Trust building is required to wear a face covering and maintain social distancing at all times.

Please visit our Patients and Visitors page for the latest guidance. This page was last updated on Monday 23 August 2021.